I was originally going to just title this Cat Dump, but that obviously doesn’t sound like something anyone would want to click on.  I have a lot of cat photos, though, and not a lot of cat updates.  Ziggy is getting up there in years and we’ve got her taking a joint supplement. She’s only been on it for about a week, but hopefully we’ll see improvement in her mobility soon.  In the meantime, she can most often be found in the kid’s book corner when upstairs or on the couch… or really anywhere comfy for sleeping.

Uzi is still active and shows no signs of aging, except perhaps for his grumpy old man routine where Vega is concerned and he gives me the evil eye if I give her too much attention.  He’s been fairly needy lately and I swear at times he and Vega are just jealous siblings both vying for my love and affection on a constant basis. 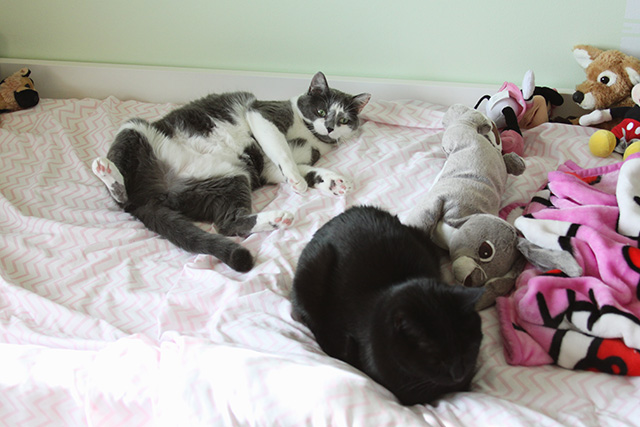 It’s funny how different the relationship is between Vega and Ziggy vs. Vega and Uzi. Vega has slightly more respect for Ziggy (doesn’t pounce on her too often) and likes to snuggle her and give her a bath, whereas with Uzi, she just wants to play and fight and annoy him and has zero respect for him.

Look at how cute and innocent I am!!

Get off my lawn!  Hooligans!

We have an absurd amount of blankets and places for cats and kids to snuggle, so you really always have to be careful when you pick a pile up because one or the other could be hiding.

See?!  Sometimes everybody plays nice!  I love how much more the cats have grown to tolerate the kids. One night Both Ziggy and Uzi hopped up on Enzo’s bed when it was time to go to sleep. They still have a love/hate relationship with Vega though, since she’s ornery and they can’t tell when she’s actually going to attack them or not.

Just a boy and a kitty hanging out.  I’m glad that Uzi has been such a good cat to have with the kids. He’s always gentle and so very patient with them, even when his ears and tail have been pulled.

Cats are good for the soul.