There hasn’t been one of these for a while!  I am linking up with A Healthy Slice of Life for Munchkin Meals today. 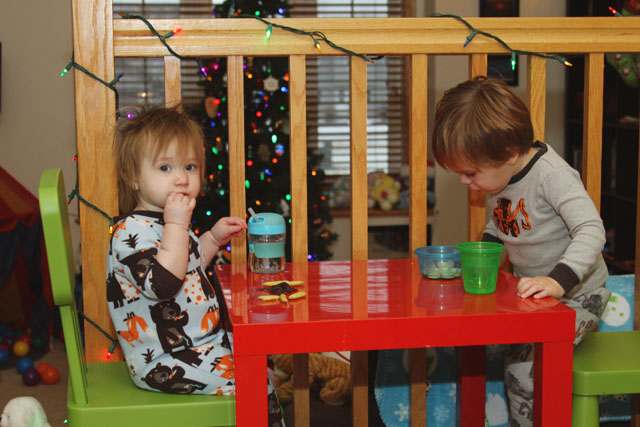 We are actually in a great stage right now because both kids have been eating really well.  Phoebe continues to eat everything just about anything we put in front of her, although lately she’s been a bit more picky about textures.  We’ve started introducing utensils as a way around this, and she is slowly getting more and more efficient.

Even Enzo has been better about trying new foods, which has been such a nice change!  He still has his favorites, of course, and a few things that he absolutely will not try, but the fact that he took a big bite of orange chicken the other night without us even asking and pronounced that it was “yummy” is a huge success to me. He’s been turning up his nose at it for months!

What has been tricky lately has been Phoebe’s mobility.  We try to let them both have snacks at the little red table, which works for the most part, but we often have to play referee to keep Phoebe from stealing Enzo’s food. He can eat hers and she doesn’t care, but if she tries the same, Enzo loses it.  Now we just have to make sure Enzo and Phoebe finish eating dinner at the same time, otherwise we have the same issue.  She wants whatever he has… and not an imitation.

All in all, I’m really happy with how well the kids have been eating, and I’m hoping to get them (Enzo especially) more involved with making meals once I can find my focus and start meal planning again.  While I could eat taco bowls all the time, the rest of the family gets bored. 😉 Granted, the boys could eat pizza every day, so we all have our favorites.