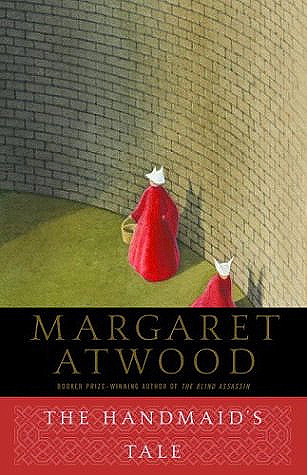 It’s no secret that The Handmaid’s Tale has become rather popular recently, despite being written 30 years ago.  Without getting into current political debates, I will just say that there are some interesting parallels and I can see why many women are deciding to re-read this novel or read it for the first time.

Okay, so… I find most dystopian novels really depressing so I don’t read that many – unless they’re YA because those usually seem less realistic to me and I can more easily separate myself from the book.  The Handmaid’s Tale is downright depressing overall.  The story is told by Offred and is a mixture of things she is experiencing presently and memories of her past. If anything, that was something I found to be the most interesting about this book.  Unlike many dystopian novels, Offred remembers the way things were and experienced them personally rather than just relating stories of how things were as told to her by others.  She was there to witness the division in time between Then and Now.

As for the representation of this new American society, it’s an extreme one, to say the least. Is it perhaps unrealistic that in such a short amount of time society as we know it could leap from what freedom women have now to having zero freedom and prized strictly for their ability to produce offspring… probably, but then again, maybe not?  At the heart of this new regime is religious fanaticism, which as history has shown can lead to great extremes which includes violence and misuse of power. Food for thought.

Offred is a Handmaid in the Republic of Gilead. She may leave the home of the Commander and his wife once a day to walk to food markets whose signs are now pictures instead of words because women are no longer allowed to read. She must lie on her back once a month and pray that the Commander makes her pregnant, because in an age of declining births, Offred and the other Handmaids are valued only if their ovaries are viable. Offred can remember the years before, when she lived and made love with her husband, Luke; when she played with and protected her daughter; when she had a job, money of her own, and access to knowledge. But all of that is gone now…